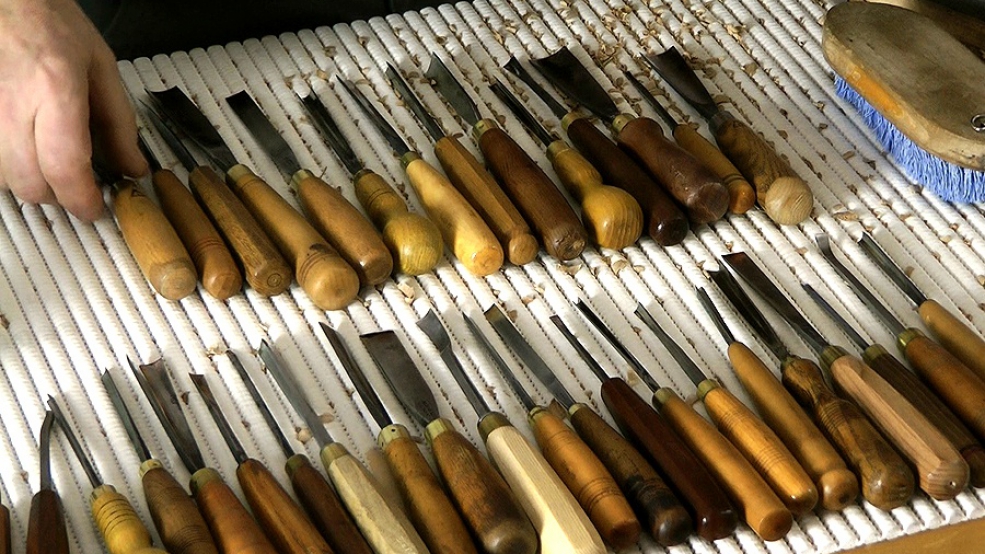 It doesn't take long when I am working on a complicated carving to find a large number of gouges and chisels on my bench - 30, 40, 50.

Of course, I'm only using one at a time and some I've used once and probably won't use again. After a while, the sheer number of tools nestling among the shaving seems to clog the carving 'flow': I find myself hunting for this one, mistaking that one, and so on.

Some Woodcarving Workshops members have written in asking, 'What's the best way to deal with lots of tools on the bench'? Here's my system.  It's fun to see it as a sort of 'animal husbandry' where the animals are carving tools and the fields are your bench surface. It's a simple idea that in the end calls once again for a little discipline - cultivating a habit.

Larry - Honestly, I just went into a carpet store, looked at their underlay and bought a length. I've no idea if it's anything special, but I doubt it. You just need to trawl through enough carpet stores!

But let me tell you this: The reason I started using it was entirely because of the filming. I normally just lay my tools straight on my bench, always have. However, the microphone was readily picking the noise of me putting tools down and picking them up, and the sound was coming across as a big clatter every time. The carpet underlay was my way of getting a bit of, 'Quiet on set!' So it's rather artificial and you don't really need it - though I have to say I've rather got to like it. Definitely stops the tools rolling.

BTW. Another very good alternative is a non-slip router mat.

I hope some day I will have the opportunity to see you carve in person!! I respect your discipline, organized, analytical approach to carving.

I have looked for the material that you place your tools on when carving, but I am unable to find in the USA. Who is the manufacture? What is the product name (I know it is carpet underlayment)? I like the "roll" design to the underlayment that you use.

I couldn't find this kind of carpet underlay where I'm at in the USA, so I'm using shelf liner instead. It's soft, rubbery, perforated, and slightly sticky.

Terry - apart from the 2 rows of 'being used' and 'have been used' that you see here, not too much. Occasionally, I find myself hunting around inefficiently and then I'll gather up all the shortbents, say, and put them to one end. As you can see from the picture above, I have many different handles and that helps me find tools quickly. If your handles are all alike, you might find some other level of organisation helpful but only if it helps you carve more efficiently.

Chris: As part of your bench discipline, do you keep the tools in any particular order on the bench e.g. by sweep or width or...?

Couldn't find a bench high enough at the Albany Oregon Carousel studio so I mounted a two-tread step platform on the low bench. I use the upper step as a tray for the primary tools and keep tools to each side for the secondarys. Having the primaries elevated makes them doubly easy to see and fetch.

Ann - Go on. I bet you could answer that one yourself! Obviously you have to plan a bit: where's the thickest bit of your carving etc, and you wouldn't want to drill into the wood more than you need to for the screw. And then - really important - you mustn't change your mind half way through the carving and start hollowing out where you planted the screw! One safe way of using a carvers screw, especially if you are uncertain of where the deep part of your relief will be, is to glue on (paper sandwich) a waste block at the back of the relief just for the screw. Cut off the block when you've finished. All this carving stuff is far better for the brain than sudoku!

Chris, when using a carver's screw on a relief carving, how far does one risk to go into its back?

Ann - It's my Spencer Franklin Hydroclamp which I use elswhere on the site (see: Techniques > Holding Your Work x5 > Adjustable...). I've extended it's metal plate with a wooden board, forming a sort of easel. The carving is held to this with a carvers screw. The carvers screw stuck out a lot at the back so I take up the slack with wooden 'washers' before fitting the fly.

Chris, even on this video, like the "3 tricks" you're working in front of a very interesting carving stand set up... Would you explain it a bit more?