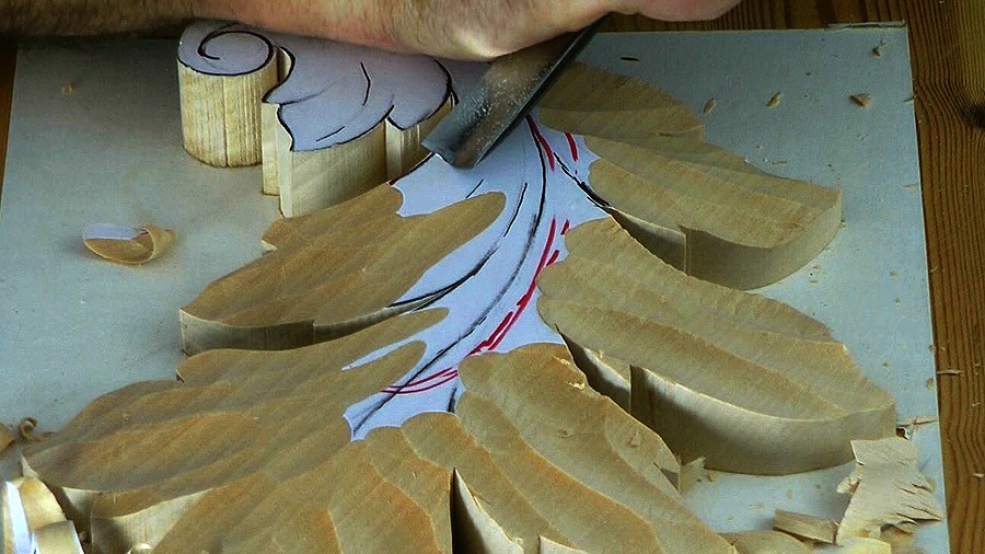 'Baroque' is another 19th century term for a style that began in Rome c1600 and spread to most of Europe, becoming the dominant form of sculpture, painting, architecture, literature, dance and music in the 17th and 18th centuries. With its exaggerated motion, drama, exuberance and grandeur, Baroque can be seen as a reaction against the restrained preceding style of the Renaissance (called 'Mannerism') with its more intellectual than natural ideals of harmony and composition.

As you saw in the introduction to this series, the carvers of the Baroque produced some jaw-dropping, smile-generating work. In this lesson I'll get down to basics with a relatively simple example of this style of acanthus leaf. Cutting out, holding down with the with paper sandwich method and bosting in the overall shape.

More on the paper sandwich method of holding carvings: here.

This Baroque example was just perfect -- clearly depicted transition from rough shaping to start of the "smoothiing" process, the latter commencing around 06:45. Brilliant example of how unconsciously competent you have become, Chris -- but for new students like me, this transition example is really an eye opener. Thank you for turning the light bulb on in my wood carving brain!

Lars - You are right! Thanks for the heads up - I haven't given a thickness anywhere. I'll add the measurement under the starting video: around 3/4in. (20mm) will do for all the leaves. More and you'll have a higher relief turnover for example; less and the leaves are a bit flatter.

Hi Chris, I can´t seem to find how thick the material should be for this leaf or the turnover leaf.
Love this kind of carving: gives me self confidence to try when you show that it's simple enough by breaking it down into stages.

Any chance you will be doing more acanthus videos? This is by far my favorite style of carving! I am still trying to get my tools in shape with inside bevels and lower cutting angles. Correcting the tools along with the videos here has helped me improve a lot. Always looking forward to new lessons and hoping for more of this style.

Autumn - Sorry, I don't have a cast and I can certainly see the benefit. I've thought about casting but it's just too costly. The best thing to do is repeat the carving. Seriously! Do your best on the first one, then critique it, then carve a second - or third. You'll soon see how you must use the full depth of the wood and how the flow works...

Hell Chris! If that's just a little 'vigorous' bosting in I'd hate to see you getting aggressive. Does anyone tell you when to stop? However, it was brilliant to watch. Thanks. I do hope that maybe one day I'll have that amount of confidence.
Pete the wood servant