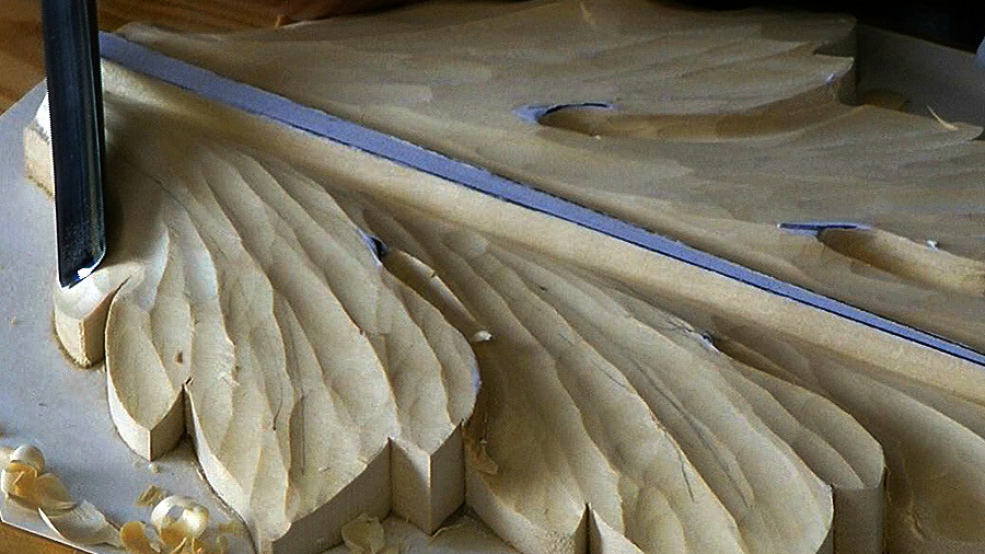 Here's a bit of history for you:

From about 800CE, after Charlemagne brought a degree of freedom from barbarian raids, a new building style influenced by the architecture of ancient Rome began to develop: weighty with round arches, massive vaulting, heavy piers and columns, and walls with small windows. This style prevailed in Europe from c.900-1200CE and in the 19th century given the term 'Romanesque'.

The acanthus leaf of this period, seen almost always in stone and usually in rows, also reflects the heaviness. It's a good one to start with: fairly straight forward and with all the main elements of later acanthuses included. In this lesson we draw an example out and bost in the overall shape.

More on the paper sandwich method of holding carvings: here.

thanks for that chris ive had ago but I was using the V tool and it didn't work so I shall be investing in some deep gouges. Thanks for the advice.

Cameron - You can't really use a V tool for the eyes, which are round. If you can, get a narrowish, deep gouge, such as a #9 x 1/8in. Cutting 'eyes' is quite a particular operation and tait's the right tool for the job. The pipes are sort of a soft 'ruck' in the leaf, rather than a form with a hard edge so, again, the V tools is too sharp. A #9 x 1/4in is the way to go. Both these tools are very useful and are part of what I think of as a basic tool kit for a busy carver. You'll use them a lot elsewhere. Glad to hear you are having a go and I hope we get to see your acanthus in the gallery!

Hi chris I don't have a u shaped gouge yet but wont to have ago hat this carving could I use a v tool to put the eyes in and also the pipes or not? thanls

hi chris
what sort of glue do you use to stick the wood down.
stuart stubbs

This is just great...and I am only into the second video!
Thank you Chris, for responding to your subscriber's requests.
Russ L.