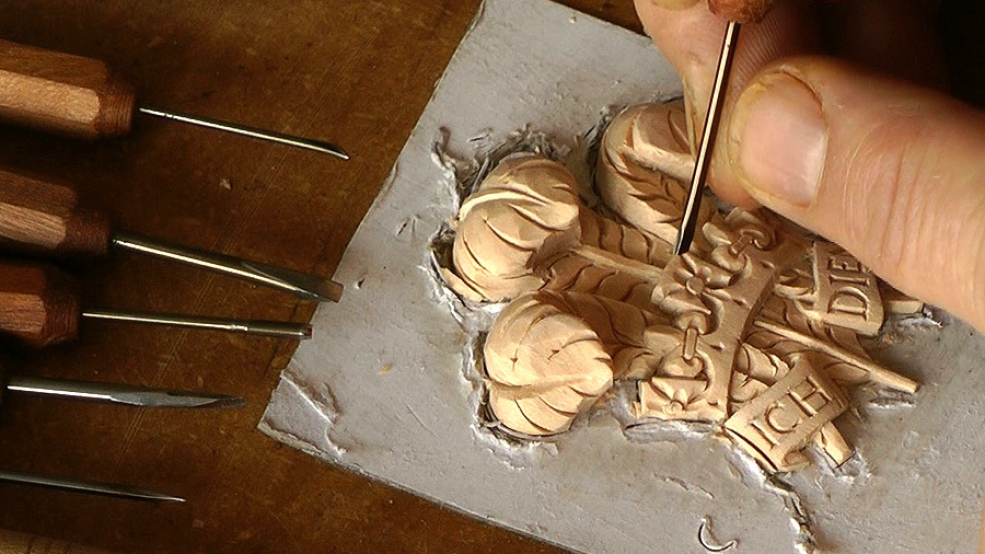 Here it is, the famous 'paper sandwich' method for holding small and intricate carvings.

This method is most often used with the sort of carving called 'appliqué', a posh way of saying 'stuck on'. You'll see such carvings 'applied' to furniture (door panels) or architectural work (fire surrounds) for example. The decorative element is carved separately, held by this method, and then glued and discretely pinned in place. Often a series of thin, light carvings are assembled to form a large decoration. However, you'll also find it useful elsewhere, for gluing on useful waste wood to a carving by which to hold it, say by a carvers screw, when other means won't work.

If you've never used the paper sandwich before, it's worth a quick trial: the paper, the glue up, and the spatula you've chosen for releasing the workpiece, before committing to extensive carving time.

Paper: use heavy duty such as 'cartridge'' paper (UK) or watercolour paper.

Glue: PVA wood glue diluted with about 1/3 water. I do vary this, however. If the piece is going to take heavy carving, I make a stronger mix: 15% water Note:

Since making this lesson I've had success using 'white spirit' (UK) or 'mineral spirits' (US) to remove the residual paper on the back of the carving.

Thanks to all those who gave advice on removing the backing paper. I'll add that if the workpiece is robust enough, setting it flat on a belt sander does the job. Quick but risky if you aren't careful.

Hello again. I have to confess that I actually do have a bandsaw, albeit 3rd hand and about the smallest one on the market. I was just teasing Chris's assumption that "everyone has a bandsaw". However to be fair, at the time it was u/s due to my not being able to find a vital part that I found missing on bringing it home from the pawn shop. I've since fixed it so to some extent that problem is solved.
However I haven't used it for the simple reason that it would have meant wasting the backing board. Aside from the intrinsic environmental philosophy of just not wasting scarce resources, where I live wood of any quality is horribly difficult to buy and if one wants a small piece, then the challenge is much worse. Even if I were to use MDF, I would have to face a 320 mile drive to find anything smaller than a 8'x4'sheet.
Repurposing the old tenon saw worked fine in the end... and sort of enabled a glow of achievement or, as Chris's late mentor might have put it "a kind of joy..."

Bert, I must apologize. The TFWW bowsaw is a true turning saw with narrow blades that will turn in the wood but hold up to moderately hard wood. I got it lieu of a bandsaw (I'm a bit afraid of them), so I could saw out small to medium carving blanks. Of course, if it's a bigger carving blank, use a bigger saw. The three blades offered can be used on Basswood/Limewood, or somewhat heavier wood such as US Butternut, sometimes called white oak.
They are based in NYC, and make a number of tools and sell good Auriou carving tools. Their other products, such as hand made carving rasps are also a bit costly.
The blades are the rub, you are right about that. You can use Nobex blades in a large variety; it's a brand of handsaws in a mitering frame. All toothings in the same length, end holes equidistant. You can also use (hold onto your hat) bandsaw blades. They come in small sizes for small jobsite bandsaws. You snap off 3 or 4 equal lengths, heat the ends and use a carbide drill bit (I believe). Or buy the kits from TFWW and make the best looking bowsaw in town. I'm meat & Potatoes myself.`

Hi Jeff. Thanks for the tip. Looking at pictures on the net, it seems pretty simple to knock one up if one can find a decent blade. I did make do with a coping saw but found it heavy going with the light blades I had to hand.

Tools for Working Wood (a seller of many tools recommended here) has a bowsaw or Turning Saw that can be used in lieu of a bandsaw. Stores easily, and has a choice of blades for the particular work or type of wood. They have a kit to make your own.
Roger Willco, Bert!

Aha! But that would involve buying a bandsaw...

And before anyone observes this conversation is becoming a blog, thanks, over and out ;)

Bert - You can do get more reach by bandsawing around the backing wood closer to the carving...

Chris - thanks for the hint. I've browsed around but the the ones on the shelf seem a bit thick ±2.5mm and more.

Tip to other readers. Check to see if the spatula you have will reach under all of your carving before you discover this some time on a Saturday afternoon just after all the shops have closed for the weekend!

Bert - Before you go to all that trouble with your tenon saw, you might like to consider a chef's 'brisket slicer'. This has a very long, thin, narrow, parallel-sided blade, used for carving joints etc. but would seem to be quite close to the spatula. You need only buy a cheap one. Whichever, you don't want the edge too sharp as you might start cutting into the wood. You want a bit of a (dull) edge though so it slides into the paper joint. Double bevel. For the saw teeth, a grinder should be enough. I've never used benchstones on these tools.

Joe - There's not need to get all the paper off, to bare wood. but the back of the carving must be flat to glue onto whatever. I've found methylated spirits (alcohol) works with some glues, especially the 'photomount' type,

Hi. I'm going to need a spatula longer than any I can find in my local hardware store (I even tried the kitchen section but found nothing but silicon) so am going to make my own from a defunct tenon saw. Is there any specific way I should shape the edges? I was thinking of going with a single ±25° blunt bevel?

after I split the paper, and got the carving off I used a damp cloth with water,rubbed on paped, it came right off,(I used elmers school glue) what was left was the glue itself,so I sanded with 80 grit paper worked quite
well Is there something else I could to just get the glue off/

David - No, never tried Titebond. It wouldn't take long to set up a little experiment with different glues or glue strengths and see what works best? I've got to say that slicing through with a spatula and popping off the carving is quite a tense business but works really well - provided you slice into the paper seam accurately to begin with, and don't try to lever. It's a great buzz when the carving just comes away!

Have you tried, or even heard of, using either rubber cement or hide glue (such as the newer Titebond liquid hide glue) as an alternative for thinned wood glue? I ave not tried it myself, but I have read that rubber cement will peel off fairly easily, and hide can be moistened and/or heated to soften and get off. I thought for sure that tree was going to break before the last of the paper gave way in the video!