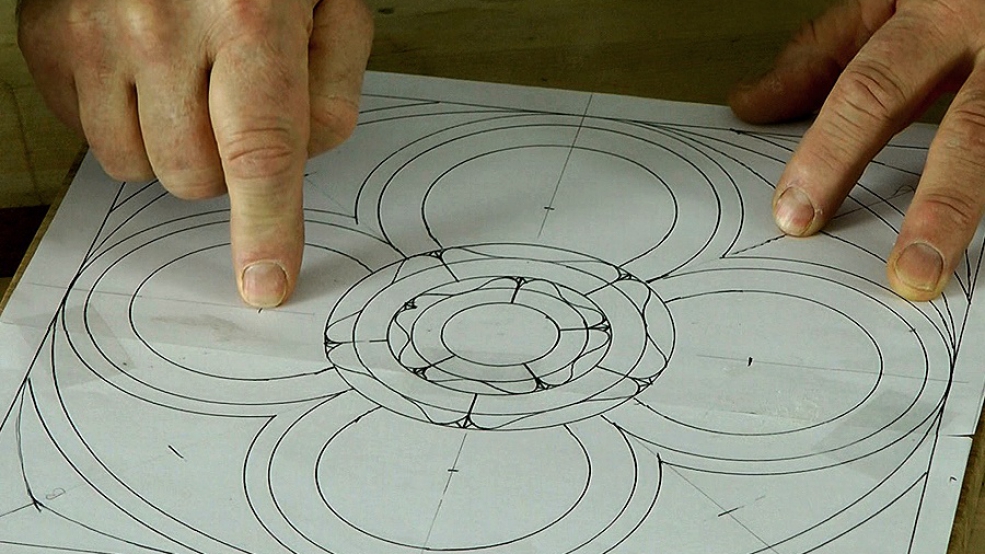 Gothic 'tracery' - the open, moulded areas with corner triangles - surrounds a Tudor Rose. Actually, I started this project thinking more about introducing tracery but came to realise that the centre rose had the more involved, more detailed carving and so gave the project a different name.

'Gothic' architecture covers roughly the 13-15th centuries, and is characterised in particular by pointed arches and the curved, circular openings more properly called 'foils'. If you search online you'll see some wonderful examples in churches and cathedrals throughout Europe.

In this project there are 4 openings - thus, a 'quatrefoil' - surrounding the central motif; and since this medieval period officially ended in England with the Tudor dynasty, I've added their famous 5-petalled rose.

For subscribing members, below is my working drawing and tool list for the Tudor Mirror, as a PDF.

Andrew - Think of an Oak tree. Huge! So there will be pieces out there. Try 'fishing whee the fish swim': look to carving and truning magazines for example. I have no problem gluing wood up - the shirt and snail carvings on Woodcarving Workshops are happily glued together - though this carving is in one piece. You want to match the colour and grain as well as possible and, as a rule, better to have 2 joints to the sides rather than a single join dead in the middle - the eye always notices symmetry and you want to make the joint discrete. Use PVA wood glue.

Hi Chris, I've found it very difficult to find oak this wide. In fact the most frustrating thing about carving for me is getting hold of seasoned timber the right size that is affordable. Is your piece joined? Would it be ok to join 2 pieces together. Carving across joints or joining carved pieces is a suggestion for future videos or info.
Many thanks
Andrew

Hello Chris, Many thanks for the reply regarding scale etc. I've now got my head around this! I've increased the scaling within the printer setting to 130% (Canon MG6150) - works a treat.

David - SCALE: The problem I have is that I need to get the drawing on an A4 sheet, standard for printers; hence the scale. The other thing is that even though your printer says 'no scale', printers do render drawings in different sizes, changing the margins for example. If, when you print any of my working drawings, the drawn scale prints less than 1 inch, then it shows either I needed to reduce the drawing size to fit or your printer has tinkered with it. I'm assuming downloaders have the means to adjust the drawing size if necessary - even making it twice as big if they want! - either on the scanner facility of a lot of printers (such as the one I use); or access to a photocopier to get the drawing to correct size. You might even grid the drawing and do the maths! I'm sorry if that's a bother; I'm not sure what else to do. SIZE: once the scale is correct on your printed drawing (ie. an inch equals an inch) then the tools I use should definitely work. However, do bear in mind that the tool list is really only a guide and that in most cases a gouge that is reasonably close will certainly do the job as well. WOOD THICKNESS: This will depend on the thickness of your mirror - I used 1inch 25mm. Sorry, I should have added a note to the working drawing; I'll make one above. Hope this helps you get on your way with the carving!

VIDEO PLAYING: Some of you have reported this video not working but, on test, it seems to play perfectly well, without a hitch. One thing you can always try is refreshing/reloading the page/ clearing the cache on your computer. This allows more space for buffering and can give a new lease of life to the streaming. It can also be a temporary broadband issue, so do try again another time. Still having problems? Then sure, do let me know and I'll do my best to investigate and solve any issue.

Hello Chris,
On your PDF of the Tudor Rose Mirror, you give a scale in inches and centimetres. You advise to print the drawing twice, which I fully understand. What IÃ?m not too sure about is the actual scale/size of the drawing once printed. My printer is set to no scaling. Once printed, is this drawing full size as shown in the video and will the recommended gouge used to carve the cove moulding Ã¦fitÃ? the drawing? Also, what thickness of wood would you advise? Any help would be appreciated.