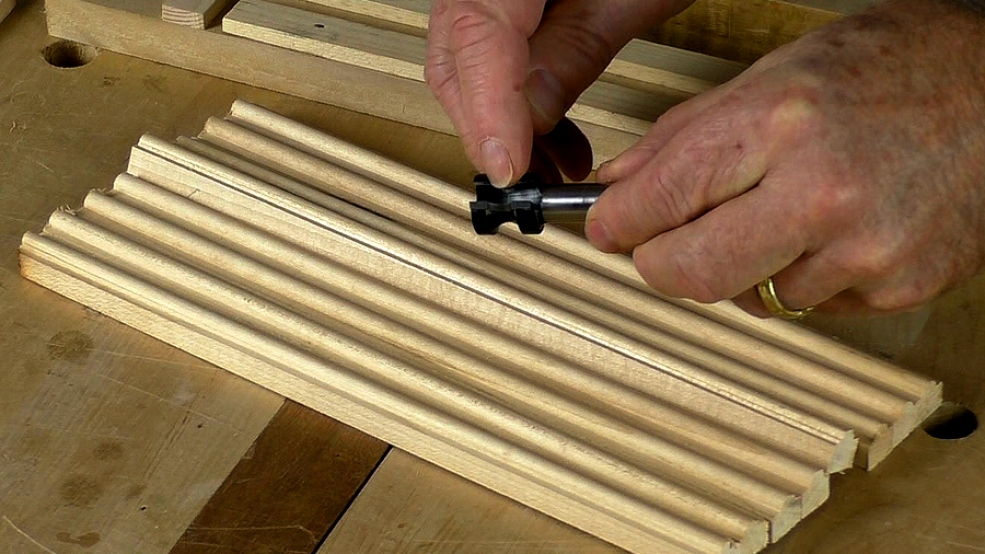 'Astragal' is an interesting word. You'll find it as another name for the tragus, a smooth articulating bone in the ankle. It derives from old Greek and Latin for 'vertebra', and sometimes referred to dice (like 'knucklebones').  Originally the astragals were architectural, beaded designs, particularly around the bases of columns and I guess the simple, smooth surface must have reminded them of the smooth surfaces of vertebrae.

The astragal as a moulding has a half-round surface lying between 2 flat planes, which are called 'fillets' - or 'quirks' if they separate this moulding from another. And, indeed, that is how astragal mouldings are usually found, mixed in with other more elaborate mouldings like the waterleaf.

Carvers can take the basic plane moulding and with judicious cuts turn it into something far more interesting. In this lesson, we'll look at making and holding some practise pieces. You'll need a router cutter to make a consistent astragal mouldings to work on, or at least know someone who can do it for you.

Note: In the video, I say the cutter is a "half inch", because that's what I mindlessly read on the shank. But that measurement was for the whole cutter, astragal and side fillets together. The important measurement is the diameter of the half-round part itself, which should be the same as the width of your gouge. I've added a correction on the video and in the download

In this lesson, we'll also look at a very simple but very effective carved moulding, which you may recognise from the thumbnail series.

Oh yes, and don't forget 'rope' moulding which you can see here as part of the Sea Chest project..