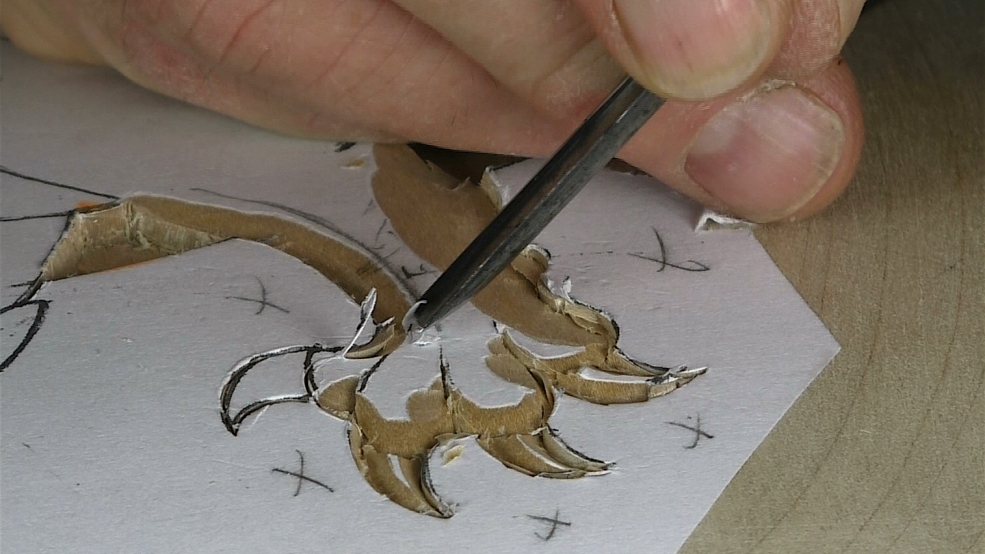 Put 'intaglio' (also called 'cavo relievo' or 'sunken carving') into the search box, top left, and you'll see some other videos in which this technique appears.

There are different ways of carving intaglio but what you rarely see it mixed with low relief carving as I do here.

Why? Because mixing these styles like this breaks the book illusion, rather like breaking the '4th Wall' on stage when someone turns out of the play to speak to the audience.

But I think it works. I think the book is an illusion anyway. How is a relief carving sunk into a book? What exactly is that background behind the lion supposed to be? So I feel there is an overall degree of playfulness which we can exploit here.

That said, here's an important point: the lion must appear to pass seamlessly from the centre relief and into its sunken place in the 'page' proper. It's a whole thing; a lion.

David - One of the most important realisations I've had over the years is that I only do a small number of things (albeit well) and repeat them throughout what I'm carving. That's certainly true here.
It doesn't matter whether it's a claw, a leaf, this or that - I repeat essentially similar cuts throughout, and just keep going.
What overwhelms people - gratifyingly from my point of view - is the scale of the design, how much there is of it. And it's always the design that has it: good, impressive design will often carry poor carving skills, but not the other way round. But in the end, the carving is just me not stopping, rather than a multitude of different, esoteric, carving skills.
So what I'm saying is that if you can successfully carve even a small part of this lion, you can indeed carve all of it.
Don't be put off. Your pay grade is no doubt a lot higher than you think it is!

Chris, This one may have been just slightly above my pay grade but I am enjoying it as long as I go slowly. Probably learning more than I realize.

David - I've just realised I didn't give the overall measurement of the lion in the download (which is meant to work with the tool list) so, good call on that! - and apologies. I've added a note under the first video in the series.
Funnily enough, however, the width of the rectangular recess just above my lion is 6in. (150mm), which would seem to be what you have. So, presumably everything else is in the same proportion.
I'd like you (and all subscribers) to feel they can modify any of the projects I design for Woodcarving Workshops. After all, this lion is totally stylised. So, if you think your paws look too big, then do reduce the size until they look right. On the other hand, it's easy to make these paws and claws too small - it's a lion!

Chris, Just how big is your lion. As you are cutting the paws,everything looks so much bigger than my lion. Across the shield is 6" wide and 8 1/4 high. The lion is 10" from left top claw to outside of tail.The size of the gouges cutting in and shaping the claws seem to be larger than the ones I can use. My lower claw is about 1 1/14" in diameter.